Optimists think that the course of events will be positive, for them personally or for society in general. Realists, on the other hand, think that the course of events might turn out to be positive; they concede, however, that they can’t really know since reality consists of complex phenomena. Optimism and realism are sometimes used as contradictory concepts. That doesn’t necessarily follow though.

Liberal thinkers can often be described as optimists with a strong sense of reality. On the one hand, they hope that a particular situation will turn out well; they even provide policy recommendations in order to facilitate the process. On the other hand, liberal thinkers are skeptical of what men, in particular politicians and bureaucrats, are capable of achieving. They have a realistic perception about the nature of humans and their capabilities.

Liberal thinkers can often be described as optimists with a strong sense of reality.

Personally, I’ve always perceived liberalism as a philosophy advocating a realistic optimism. For instance, we can look back to the big controversy about socialist planning in the 1920s (the “socialist calculation debate“). Ludwig von Mises, Friedrich A. von Hayek and later Murray N. Rothbard argued that a planned economy must inevitably fail at some point because its planners lack the knowledge necessary to determine economic in- and outputs. Mises and Hayek were proven right with their predictions when the Soviet system collapsed economically and politically in the early 1990s. They were pessimistic about the Soviet economy, but both Mises and Hayek felt optimistic about their own policy proposals regarding the market economy.

Many people nowadays think that capitalism and the free enterprise system have failed, given widespread poverty, the waste of resources, corruption, and so on. However, contrary to common belief, figures show that the world has become a fundamentally better place (please click on the picture to increase its size): 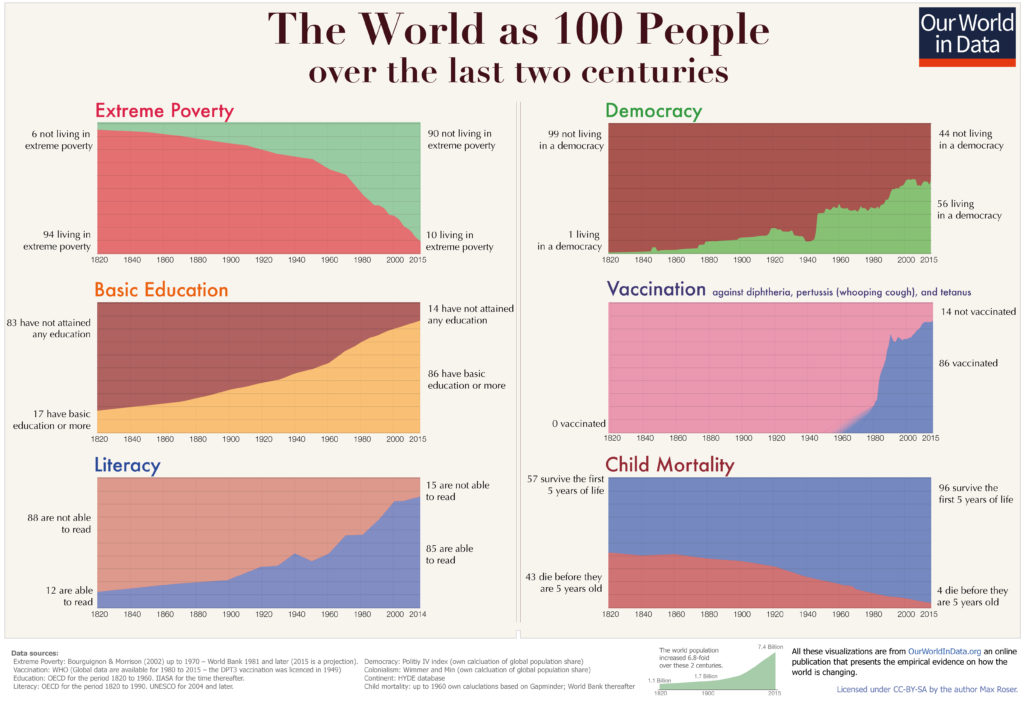 Liberals (read libertarians) can (and should) be more optimistic given the continuing overall trend which constantly confirms that people have become healthier, live in freer societies, and are better educated than in the 19th century (let alone earlier periods of mankind).

At the same time, we have been warned that we should remain skeptical towards supposed panaceas and prophecies coming from the ones that think they will change the world single-handedly; the ones that feel confident that they possess the recipes to solve all the ills of mankind; and those claiming that their proposed solutions are without alternative. In his Nobel Prize lecture, Hayek invoked us not to be imprudent or foolish when it comes to people that pretend to know everything (“The Pretence of Knowledge”). His statement emphasizes that we should exercise restraint in our own dealings, but also remain extremely cautious about what politics can actually accomplish for the good of society.

To conclude this short essay, I’d like to quote Karl Popper. He was that kind of optimistic thinker with an insistent sense of reality:

“The future is open. It is not predetermined and thus cannot be predicted – except by accident. The possibilities that lie in the future are infinite. When I say ‘It is our duty to remain optimists’, this includes not only the openness of the future but also that which all of us contribute to it by everything we do: we are all responsible for what the future holds in store. Thus it is our duty, not to prophesy evil, but, rather, to fight for a better world.”

Karl Popper, The Myth of the Framework, 1994